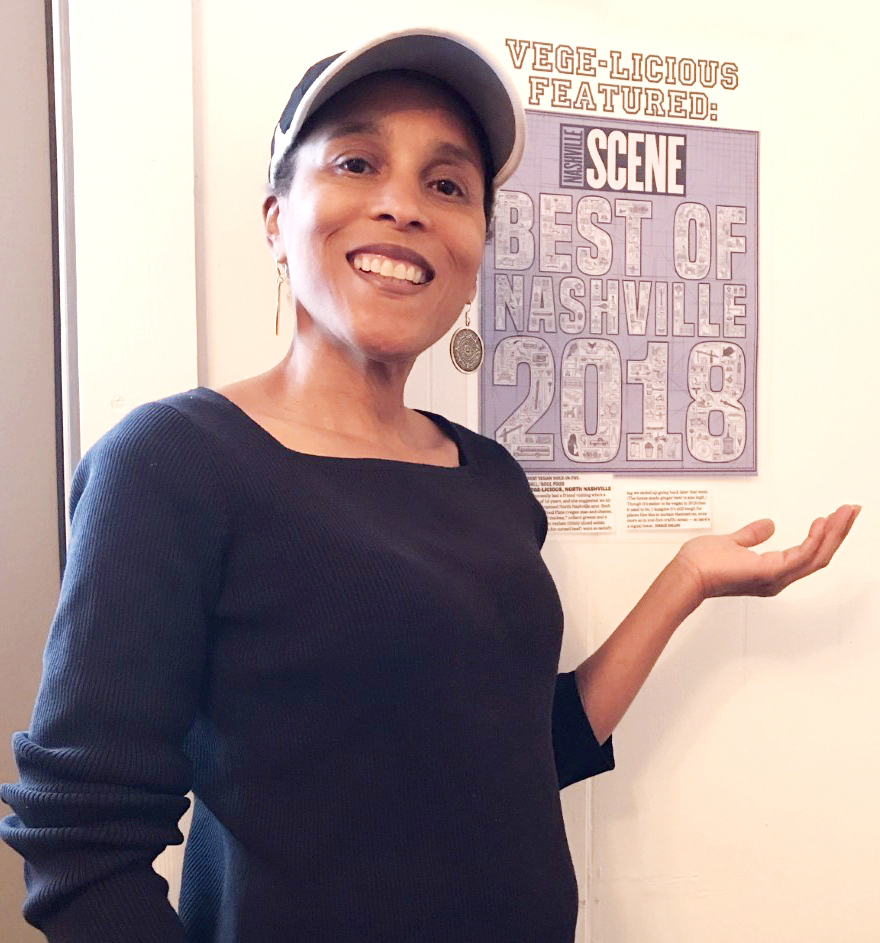 She puts the delicious in Vege-licious, a Nashville vegan original.

The year that Carrie Underwood won American Idol, and The Apple Store opened in Green Hills, when Hurricane Katrina made landfall, Bettina Thomas moved from New Jersey to North Nashville. The year was 2005. Nashville hadn’t yet begun it’s “IT City” climb. That year however Moorestown, NJ was named the best place to live according to CNN Money and Chatham, NJ came in at #9. So what compelled Bettina to pull up roots and resettle in the South when her own home state was in the spotlight?

“I wanted  to leave corporate America,” Thomas said, acknowledging that the move South would be somewhat of a culture-shock which made her question her move along the way. “But I’m glad I did. It was totally intuitive.”

Thomas has a finance background working in the financial industry in New York, periodically trading on Wall Street. She switched gears in Nashville and Vege-licious was born.

The story of Vege-licious is as unlikely as a vegan soul food restaurant in Nashville in 2005. Thomas explains: “A friend got really sick. So while she was off her feet, I started cooking for her. And when she got better, she asked me to keep cooking healthy vegan meals for her. I’ll pay you, she said.

“She asked me for a couple of years. So finally I gave in and said I would ask some of my other friends if they wanted to do a dinner one night a week on the weekend. They said yes and soon my house was full with dinner guests. And one night turned into two nights—Friday and Saturday. And then it wasn’t long until I didn’t have enough room in my house so I started looking for a place to open a restaurant.”

That restaurant became Vege-licious, a 100 percent vegan restaurant at 513B Fisk Street off Charlotte and Dr. D.B. Todd, Jr. Blvd. It has a small indoor dining area, and lots of picnic tables outside under a cute white canopy which is enclosed in cooler weather.

“We get a lot of tourists. I’d say about 40% of our customers are from out-of-town,” Thomas explained. What they come for is homestyle vegan soul food, like our Soul Food Plate featuring BBQ chicken, mac and cheese, candied yams and collards, a SoulChik Plate with Nashville Hot fried Chicken, home fries and mac and cheese, Spinach Lasagna with two cheeses made in house or our savory “Not” Bacon Cheese Burger, which is our house made Black Bean Burger, Fried Chicken Sandwich, Reuben, Philly Cheese or Vegan Gyro. In addition to plant-based entrees and sides, Vege-licious also offers several gluten-free options.

What Vege-licious customers stay for is a buffet of desserts including a Vegan Cheesecake, Bread Pudding topped with coconut ice cream and an assortment of cakes. All vegan.

Vege-licious also serves up a Saturday Brunch from 10 a.m. to 2 p.m. with the regular menu starting at 11 a.m. and going through 7 p.m. on Saturday. Brunch includes Breakfast Tacos and Burritos, with scrambled tofu eggs, coconut bacon and cheese, and an assortment of pancakes from blueberry to peaches and cream and chocolate lovers’ pancakes—all 100 percent plant based.

How did Thomas acquire her taste for vegan and skills for turning coconut into bacon?

“I’ve been vegetarian since the 5thgrade,” she said. “My Mom was a good cook…a great cook…but she always cooked the same things—collards, beans, rutabagas, hot water cornbread, dumplings, soups, etc., which sparked my exploration into preparing different meals.”

During college, a period in her life where she ate a lot of junk food, according to Thomas, she realized how bad it made her body feel. “I started delving into food—how it relates to health and nutrition. I even started eating only raw food for a while and my interest and passion for healthy meals grew from there.”

Thomas became certified in several different cooking and chef related programs for herself. Never with plans to open a restaurant. Plus she’s been experimenting on her own with vegetarian, vegan and raw food prep for more than 20 years.

Thomas admits, when she came to Nashville there were not many vegan choices. “I think Nashville is finally beginning to understand healthy eating. They’re beginning to correlate between what they’re putting in their bodies and how it affects their health.”

She’s currently working on expanding into a larger space in the North Nashville area so that she can introduce more raw food choices on the menu.

What do you want people to know most about Vege-licious?

“That we are a vegan homestyle soul food restaurant that creates meals that satisfy even most skeptical omnivores,” Thomas said. “Our goal was to let people know that you can still enjoy some of the old non-vegan options without causing harm to your body or animals.”

And what does she most want people to know about her?

“The 20 years of experience with raw food, vegetarian and vegan food prep has translated into a vegan resaurant in Nashville. And that I’m looking forward to growing and becoming a staple in the community that will continue to provide delicious healthy vegan meals. I am delighted to get the opportunity to share meals that I’ve been preparing for years at home and meet some great people along the way. I absolutely love what I’m doing. ”

You’ll find Bettina Thomas most days at Vege-licious at 513B Fisk Street (look for the banners) from 11-7 Tuesday through Friday and 10-7 on Saturday. Also all of the major delivery company sites (Postmates, Uber, GrubHub and Doordash) provide delivery from the restaurant.

3 Comments
← PREVIOUS POST
Peta's Top 10 Vegan Cities
NEXT POST →
How much water does the body need each day?